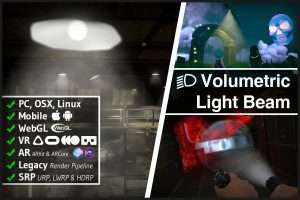 This is a paid asset, but now you can download Volumetric Light Beam for FREE, but please remember this package is provided only for learning purposes or to be able to test before buying the product, NOT FOR COMMERCIAL PURPOSES.

The perfect, easy and cheap way to simulate density, depth and volume for your spotlights and flashlights, even on Mobile!
It greatly improves the lighting of your scenes by automatically and efficiently generating truly volumetric procedural beams of light to render high quality light shafts effects.

Note that this asset is NOT a fullscreen Post Process / image effect. This is NOT similar to Unity’s built-in Sun Shafts image effect.

Instead, Volumetric Light Beam will generate optimized geometry and material foreach light beam. This technique has several advantages:
– More granularity: precisely customize each light beam independently.
– You can add light beams anywhere, even at locations where there is no light.
– When attached to a spot-light, it supports realtime, baked and mixed modes.
– Much easier to integrate with your own pipeline: nothing to mix with your own image effects or post-processing stack, no command buffer, doesn’t require compute shader capabilities.
– Runs faster. No Post Process to add to your camera.
– Supports low-end platforms like mobile.

How to use it?

Volumetric Light Beam is designed to be extremely easy to use. No setup is required. You don’t have to link multiple objects together. You just need to use 1 simple new component. You can literally add a new light beam in 2 clicks!

You can precisely customize the rendering of each beam of light by adjusting a set of user-friendly properties. For even faster nice looking results, some properties are automatically binded to the Spot light attached.

– This asset doesn’t generate volumetric shadows. To compensate this limitation, the asset features 2 Dynamic Occlusion techniques: ‘Dynamic Occlusion Raycasting’ and ‘Dynamic Occlusion Depth Buffer’.
– It only supports ‘spotlights’ (beams shaped like a cone). Point lights or directional lights are not supported.
– The plugin fully works with Deferred Rendering path: like any semi-transparent objects, beams are rendered using a Forward rendering pass on top of the Deferred one. This is a well known limitation of the Deferred Rendering technique.
– 3D Noise feature requires shader capabilities equal or higher than Shader Model 3.5 / OpenGL ES 3.0. Any mobile devices released after 2012 should support it.
– Volumetric Dust Particles are only supported on Unity 5.5 or above.
– Since this plugin requires custom scripts execution, it won’t work for a VRChat world using the VRCSDK.

Volumetric Light Beam is actively developed. The current price is discounted and will be increased as more features are added.
– Improve density rendering when looking from the inside
– Support skewed beams
– Expose events in a public API 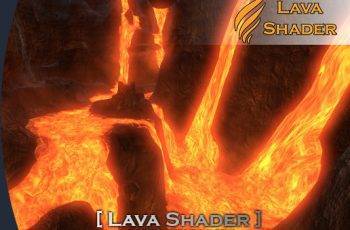 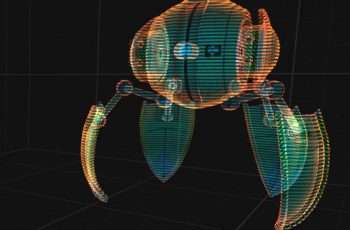